NOTE: A very small part of me wants to try to change the timestamp on these posts; I was not actually up at 4:30 am yesterday watching “Safety Dance” on Youtube (though that would make for an interesting story). The majority of me, however, doesn’t actually care. So if you’re reading this, and actually noted the discrepancy (or were worried about my circadian rhythm), tough cookies. Deal. 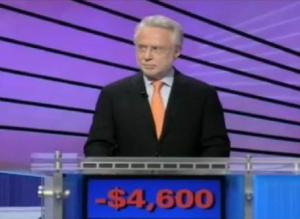 Wolf Blitzer on celebrity Jeopardy!, or What I Don't Want To Do On The Show

Last night I took a Jeopardy! contestant test-thingie online, and – holy frozen balls of dog shit! It was hard! I changed my mind. I don’t want to be on Jeopardy anymore. I don’t want to be the one chick who finishes the jeopardy round with $100 (or – gasp! – the one who doesn’t make it to final Jeopardy!) How the hell am I supposed to know what town Roger Federer was born in?

Instead I’ve decided to just wait until I’m famous and try for a spot on celebrity Jeopardy, preferably playing against Wolf Blitzer (see pic). The questions are ridiculously easier then, right? And the money goes to charity, which will make me feel all warm and fuzzy inside. See? Win – win!