Book Review: The Probability of Miracles

When it comes to being entertained, I can be pretty cynical and jaded. I watch the television show, see the film, read the book, and in a half-hour I know the ending (or at least, I think that I do). 90% of the time I’m right (or halfway there). 9% of the time I’m completely surprised (and occasionally disappointed). As for that remaining 1%? I’m so freaking entertained and engrossed by the entire thing that I’m not even attempting to venture a guess. 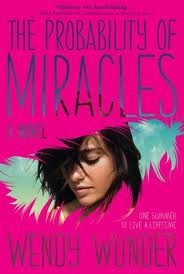 image courtesy barnesandnoble.com (also: this book is not about a victoria's secret angel, which is what I think it looks like)

Like with the book I just finished: The Probability of Miracles by Wendy Wunder (awesome name, eh?). It’s actually classified as a “young adult” novel but I’m technically a young adult, right?* At least, it didn’t read like the sappy, melodrama-ridden schlock that I feared it might be.

Because the potential is there: Cam, our angsty-and-teenaged main character, has cancer and has exhausted all of her treatment options (what an uplifting premise, right?). So her mother decides to take their family to a town in Maine that’s supposedly “enchanted” or “magical” in order to “heal” her.

And that’s all I’m going to tell you, because hey – reading that much of the synopsis hooked me.

A couple notes:
– The characterization and scene descriptions are, basically, magical. Wendy can write, y’all. Even the minorest of characters are somehow presented in Technicolor detail without being distractingly-wordy.

– You can read the first few chapters online here. Try not to be turned off by the teeny-bopper vibe from this website. The publisher (?) seems to be trying really hard to sell this book. I see what they’re trying to do – make it appeal to a generation of iPhone-addicted social media whores – but it was overkill times one thousand, for me.

*You shut your mouth.

…which, loosely translated, refers to Lassie saving Bontemps from a vampire casino.

Happy Mardi Gras, everyone! And no, I don’t completely understand what I am wishing you. Something about eating King Cake – which I believe is some kind of celebratory choking hazard – and beignets – which sounds like ornamental cabinet hinges but, from what I understand, are much tastier.

Get your partying out now, people, because after this you’ve only got forty days to bitch to your coworkers and acquaintances about the Great Sacrifices you’ve made for Lent and how they’re truly Cramping Your Style. I mean, omg: you’re giving up Diet Coke for Lent? How will you, like, manage?

My grasp of (what I call) Real Christianity is tenuous, but I think maybe the point of Lenten sacrifice isn’t to broadcast it to the world in hopes of promoting your Pity Party. I’m not saying that giving up soda or chocolate or coffee isn’t a “good” enough sacrifice.  I’m just saying: isn’t the absence of fill-in-the-blank supposed to remind you of, oh, Something Greater?

Whatever. It’s just a thought. 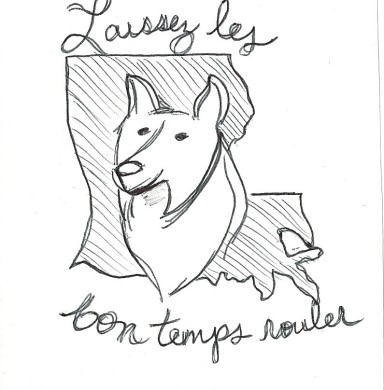 Edit:  D’oh! I think Lassie should be wearing beads here. Except it took me long enough to figure out how to draw a collie that didn’t look like a horse-man, so just pull a Gladys Knight and use your imagination.

how to tell I’ve won the lottery.

If I ever win the lottery, I’m not going to tell anyone about it.

Parents, brother: okay, you can know.

Everyone else: sorry, but it’s okay. There will be indicators. Read on.

1. I will begin construction on a family compound.
Big plot of land, several houses. Separate houses. I love my family, but there’s a limit. Compound would also include a guest house for friends….if you’re ever invited to “the ranch,” odds are good Julie’s come into some money.

2. I will arrange to anonymously give my family and friends stuff I think they need.
You might log into your account with your lender and see the balance is zero… Or maybe when you wake up one morning your front porch will be filled with a variety of superfluous gift baskets filled with the kind of items no one buys for themselves but secretly covets, mainly: anything that’s ever been As Seen On TV. As you slice open leather shoes with your new Yoshi Blade, think of me.

And yes, leather shoes will be included in the basket.

4. I will redecorate.
Maybe I haven’t won enough to build a set of new homes. Maybe I’m still living in my little apartment. But I will invite you over for a Cheez-it and Sangria party and you will see that there is now a Skee-Ball machine where the couch used to be.

Also, a spread containing every variety of Cheez-it available in this country.

You are now asking yourself Why wouldn’t she tell me that she won the lottery? We are Bestest Friends! We begin phone conversations calling each other derogatory names for women! We have known each other for years! We have held each others hair while we puked up “punch” that was 97% tequila and 3% ice! How could she not tell me?

To be honest, this is for purely selfish reasons. If I came into goo-gobs of money (a Juanita term), there would truly be part of me that would want to help out everybody I know and I’d be so guilt-ridden and anxious about not being able to give money to every single person that my winnings would end up being spent on rhinoceros-strength benzodiazepines that have been banned by the FDA.

When the alternative is all-you-can eat Cheez-its and unlimited Skee-ball, I think you’ll come to respect my decision.

a mock-up of my living room, apres lottery. note the current location of the couch (indicated by an arrow) and its replacement

Have I ever told you about the time I…? I did? You sure?

When I think that I’m telling a Great Story, one of two things usually happen: Half of the time, I realize halfway through that I’ve already told it and the people listening to me are only being polite. During the other half, the people listening just stop me outright. Or they roll their eyes so hard they actually do stay that way.

I think this is because 99% of the time, I’ve already told the story to myself. Whoa, crazy lady alert. Code red, folks.

Okay, let me explain:
Everyone’s got a neural mechanism responsible for their internal narration, right? I think, at the most basical of levels,  it’s just a human thing. I believe it’s located in the hypoparietathalareticulumus, yes? Yes.

I zeroed in on mine at a pretty early age. Who knows why, perhaps as an escape from my normal, trauma-free childhood. Anyway, I have always meticulously chronicled the things that happen around me – for what purpose, I’m unsure. Sometimes it’s so I can tell the story to others. The rest of the time, it’s just a nutty little compulsion, I suppose.

But as far as habits go, I’d file this one under Weird, But Occasionally Useful. I do it so often I think this is why I remember my dreams so frequently: my brain just automatically goes into Recap Mode, even when I’m only sorta-awake, so that by the time I wake up, I have a nice prepackaged anecdote waiting for me.*

Anyway, I throw this out there for two reasons.
First: as an apology and forewarning to you, Gentle Reader(s). I’m trying to write more often, which inevitably means I’ll tell the damn airplane dream story at least seven more times. And don’t get me started on the countless references to Unfortunate Haircuts of My Past. I regret those already, even more so than the Perm of ’89 or the Bowl Cut of ’98. Oh god. Flashbacks.
Second: I’m curious as to how strange this mental peccadillo truly is. I imagine that it’s not that weird: everyone does it… right? (Pleasesayyes).

That’s all I got. I tried to find some kind of really nice way to tie this all together but I can’t. So here’s a gratuitous link to something I find very funny, but has absolutely nothing to do with everything I just wrote (you’re welcome):

*I always imagine that these little “I had a dream last night that…” stories are fantastic icebreakers, even though I’m pretty sure most of my casual acquaintances think that I have some sort of out-of-control hallucinogen habit or just completely make this shit up, neither of which are true. Also, define “habit.”

I’D rather be spelunking, but only because I like how it sounds.

Hey, people who have those “I’d Rather Be…” bumper stickers: I don’t care. Actually, no one cares. No one gives an insert-weird-idiom-here that you like to fish for bass or run marathons or exploit indigenous peoples or take landscape photography. If you’d truly rather be doing it, you’d fucking be doing it, yes?

No? Well, whatever. I still don’t care.

I mean, HELLO. AN-Y-ONE would rather be doing something else instead of whatever it is they’re currently doing as you read the ass of their Honda, right?

What needs to happen is someone should start printing bumper stickers that go on the front of your car. They’d look something like this:

Someone get on that. Please.