I admit, I took a little respite from my compulsive job-search recently. Checking the same websites fourteen times a day proved to be less-than-fruitful (go figure!), so I scaled it back a bit. As I flipped over the ol’ calendar into 2011, I restarted my searching with (somewhat) renewed intensity. Here’s a snippet of what I’ve found: 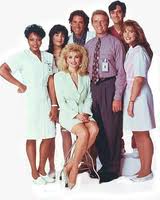 the cast of Nurses, an NBC spin-off of Empty Nest. And now your television history lesson is complete.

* I’ve had to wade through a lot of medical and faculty positions posted at my local universities, two of which have major teaching hospitals / medical programs. Some of these sound pretty intriguing, but as qualified as I think I am for the position of “surgery scheduler,” watching reruns of Nurses (anyone else remember that show? Anyone?) doesn’t seem like it fits with the “two years experience” criteria.

* There’s also an interesting number of student affiars/teaching positions open for some new institutions based in the Middle East. And when I say “interesting” I mean “duh.”

* It wasn’t very long ago that I invested in resume paper and large manilla envelopes in anticipation of a post-graduation job hunt. I’ve not had to submit a single application/cover letter/ resume by mail in this ENTIRE, most recent, process. Everything is electronic. I have mixed feelings about this.
Also, I still have some of that paper.

* I genuinely feel as if I’ve learned some pretty valuable and applicable lessons in my current position – things that would serve me well in a 9-5 job. But I can’t seem to communicate this in cover letter form without sounding like a form-letter-writing idiot.

No, really, I love to write the way Keith Olbermann loves to hear himself talk. But when it comes to putting together a cover letter I am helpless and the words just sort of fall limply out of my brain and lay there on the page like a wet blanket. Blah! It all sounds like crap! Crap, I tell you!

That’s all I have to say about this. It was real nice talking with you.

Error: Twitter did not respond. Please wait a few minutes and refresh this page.