But then there’s the issue with the space gloves…

I’d like to state, for the record, that the version of Edward Scissorhands that appeared to me in a dream twenty-two years ago* was far more interesting than the version released to filmgoers.

Do you remember your dreams? I’m able to recall at least one or two random snippets of my sleep-nonsense almost every single morning. A (very informal) poll of some coworkers reveals that this is sort of an odd phenomenon, but the way I figure it, I live inside of my own head most of the time anyway. I think I’ve trained my brain to latch onto this kind of crap longer than some people.

Anyway, where was I? Oh yeah. Scissorhands. Basically I went to sleep one night, dreamed that I was watching the film, and woke up absolutely convinced that the movie took place entirely on a spaceship. I thought I was some sort of Film Psychic – I hadn’t seen the movie, had caught maybe three seconds of the trailer, and yet I, Julie, was able to piece together the entire plot in my sleep.

Surely there was a career in that, right?

It wasn’t until much later that I realized I had been just a teensy bit off-base, though I suppose it didn’t completely surprise me (for the record, I’ve still never seen the film in its entirety – is there a space-travel sequence of which I’ve been hitherto unaware? Pleasesayyespleasesayyes).

And this has happened to me before, a few times. I just can’t recall which movie I dreamed up. The Fast and the Furious, maybe. Tell me: do they drive quickly and vehemently? Because I might’ve called that one. 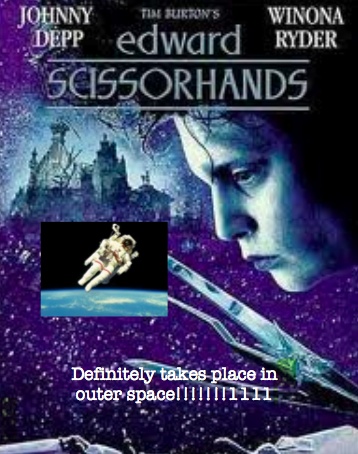 just a mock-up. ya know, just to see how the public responds to my idea.