Erik-Jan de Boer: Your family back home is proud.

Whoopsy-daisies! Only today, when I opened up the newspaper to see how well I did with my Oscar predictions, did I realize I didn’t include my pick for Best Picture in yesterday’s post.

It was Argo, for the record. No lie.

And yes, I have not actually watched the ceremony yet. It’s on the DVR, taking up approximately 97% of its available recording space. I figure this way, I can at least fast forward through the junk. Or hit pause as the camera falls upon a delectable piece of eye candy.

Except no – not really. The pausing thing, I mean. I’m really bad at that. I’ll be watching something, and hit pause because I have to pee, or I’m thirsty, or I suddenly remember that the clothes I put in the washer were done like four hours ago, damnit! Now I have to rewash them because they’re practically moldy! and without fail the image I end up freezing on my television screen is someone making the most hideous, horrible (but downright hilarious) face. Picture the most handsome/beautiful/desirable person you can imagine. Now picture that person about to release a massive sneeze.

In other news, hearty congratu-fucking-lations to the best Sound Editor in the Land: 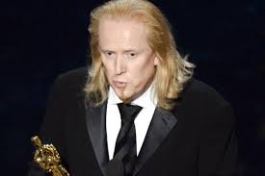 I think maybe you had to share this with some other people, but they don’t count, sir. In my heart, you will always be Nummer Ett