with this post, I’m trying to make up for days I missed.

People not from around these parts – did you know there is a river in Missouri called the Huzzah River? Only it’s pronounced HOO-zah, not Huh-ZAH. It’s uncannily similar to the pronunciation of the word “Hoosier” – which is appropriate, seeing as that’s the main demographic of their float traffic.*

In my current job, I look at a lot of maps. If you were to tell 10-year-old Me that I would grow up to have a job where I looked at maps for approximately 8 hours a day I would have been giddy with delight (oh, the simple things). I also talk to a lot of people in a lot of different places, and through these conversations I’ve been corrected countless times on my pronunciation of local towns/landmarks/surnames/every-fucking-thing else. Learning how other folks pronounce things, weirdly enough, also delights me. Some of main ones that I encounter over and over again: 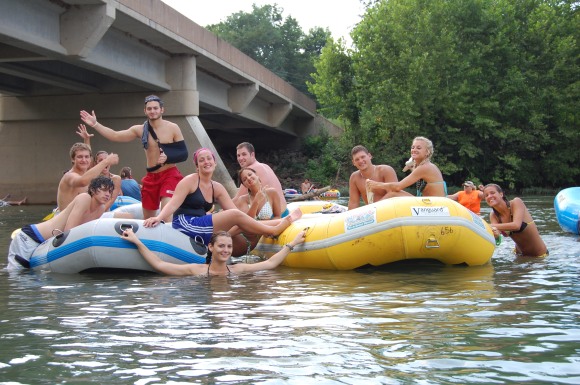 I just randomly Google’d “huzzah float” and this image came up. While it does not capture the “Hoosier je ne sais quoi” I was looking for, the bro in the sling represents another demographic not to be overlooked. $500 says he got shit-canned his first night down there and fell off something. THE FLOAT MUST GO ON, BROS!

*Don’t misunderstand. I, myself, am such a hoosier [Missouri usage].
…Hell, I guess I’m even an honorary Hoosier [Indiana usage].