Last week I thought I invented something awesome, only to discover it’s been done a hundred-million times before. Nevertheless, it’s fast and easy and cheap, so I’ll share with you now: 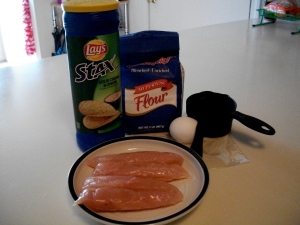 2. Add appx 2 tbsp flour (about a 1/2 tbsp per fillet, depending on size) and a generous handful of chips to a plastic baggie – mix and crush the  flour-and-chip mixture. This is the fun part. Trust me.

4. Dip each fillet in the egg, then transfer to the flour-and-chip mixture.

Results:
The entire thing is easy-peasy to make, yet gives one the feeling of having actually “cooked” (what with the egg breaking and flour dredging and whatnot). The potential for variation in breading is about limitless as well. I chose sour cream and onion chips because it’s what I had on hand.

Suggestions:
The chicken was not nearly as flavorful as I assumed it would be, so seasoning the chicken itself (salt, pepper, etc;) prior to dredging might help. Also, seasoning the mixture itself – though the chips might be flavorful on their own, they seem to lose some potency in the baking process.

Pair with microwaveable steamed veggies for the ultimate easy-but-looks-like-you-took-time effect and enjoy!