I’ve long lived on the edges of the socially acceptable. I wore flannel shirts waaaay longer than was trendy, was briefly obsessed with dancehall music, and wasn’t aware that MTV existed until I was, like, fourteen. I was, and am, a weird little specimen sometimes.

I’ve also publicly declared that CSI:Miami is the Best of the CSIs, which was met with about as much acceptance as when I carried an Army surplus knapsack as a backpack in high school. Will I change my mind and take it back one day? Perhaps, but I still enjoy the reruns (the last two seasons have been a bit wonky) and continue to defend it.

I also once declared that I was a fan of Stargate: Atlantis, to which someone asked if I was serious. Uh, well, I am (though the main reason is that I’ve never seen SG-1 [the original] or Stargate Universe [the third-born] so I have nothing on which to base any kind of qualitative comparison). 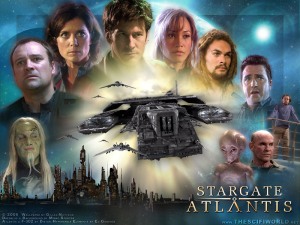 Don't think too hard about it and you'll be fine.

I sat down to make a list (a la my CSI: Miami manifesto) of why I like the series so much, except I quickly realized that when it comes down to it, only two reasons matter:

Something about Canadian-made dramas: I don’t know if it’s that all the extras have the accent or what, but man! I love ’em (or at least what I’ve seen, which isn’t a lot, I guess). And the whole concept of finding this Ancient-created lost city of technological bullshittery that can only be accessed if you have some special gene and – oh! Did I mention the magical planet jumping through the stargate? – It’s all just sublime.

How’s that for a glowing recommendation? Maybe you just have to see it to understand the majesty.

Why yes I did, and you either understand me or you don’t.

I suppose it’s the same with any television series or series franchise: There’s always some sort of fringe element who pledges allegiance to the post-jumping of the shark era or the bastard stepchild of the series, the third or fourth born that was created to ride a wave of profitability. Their cultish fandom of something that’s so universally regarded as “not as good” is viewed as slightly off-kilter. It’s like someone saying they liked The X-Files better with Robert Patrick. Like, for real?

Now if you’ll excuse me, I’ve got some Netflix’ing to do.


*Some would argue that these are intrinsically linked, and I can see their point(s).