You already know that:
I’ve often been slightly (read: highly) behind the curve when it comes to some popular trends. When this kind of silly, satirical, juvenile, demented alternative sound was pouring out of college radio stations, I was young-ish enough to not quite grasp what college actually was.*

The Allmusic link below calls Ween “bratty deconstructionists, kicking dirt on the pop world around them with demented glee.” What writing!

Anyway, I fully intended today to put the spotlight on Nerf Herder, whose name I will always remember but whose music I’ve long forgot. But in reading up on those guys, I read about a band called The Dead Milkmen (with the line “You either found them funny or you didn’t” catching my eye), and in reading about them, I re-came across Ween. Oh, Ween! Hey, it’s them!

Wait, who are they again?

This song makes me laugh… a lot. I think it sort of sums up the alternative anti-hipsterism of the early-to-mid-90s fairly well (were they called hipsters back then?)

p.s. I don’t think this particular song is part of their discography, as it were. It might even have just been some song they just sort of shit out on the radio one day. BUT if you do a search on this song, you get a lot of irate Morrissey fans dropping f-bombs. Whoa, kids. Calm down.

*Two years of Master’s-level work on the subject and I’m still not sure.

First, you know who Anthony Bourdain is, right?

Oh, you don’t? Uh, well, he’s… Well, I’d go out on a limb and throw him in the “awesome” category, with a little overlap into “cocky asshole” Land.

But I say it with love – and perhaps a bit more love after reading this, his first “tell-all.”

Second, you (probably) needn’t be overly familiar with this chef’s career and assorted media exploits to enjoy this particular read. You also needn’t be a denizen of the Restaurant World (not that I really am, being a strictly Front Of House floozy) to appreciate it (but it helps in a vaguely “I’m in on the joke” kind of way).

Third, I’ll let you borrow my copy if you want.

Here’s why:
1. Ol’ Tony is, above all other things, an unapologetic bastard. I mean, he’s a chef…basically. And this is the story of how he became a chef…basically. But the colorful, anecdotal, bits really pull the entire thing together, much like a/an <insert lame culinary reference here>, and it’s what kept me turning the pages.

2. It’s an easy read. If you’ve ever caught an episode of No Reservations (and dear God, I hope you have*), the narrative style of that program is similar to the book.

3. It’s fascinating. Really. The subtitle Adventures in the Culinary Underbelly couldn’t have hit the nail on the head with any more precision. Because, at least the way he tells it, it is pretty damn adventurous. And underbelly-like, but you probably knew that already.

4. It sticks to what’s relevant. He tosses in references to the assorted debauchery of his past, but he doesn’t loll around in it and luxuriate like some James Frey-esque, self-serving bastard. Had there been chapters dedicated to Where His Life Went Wrong or How He Saw The Light And Got His Shit Together, I’d be much less impressed. Scoring smack in some filthy alley is a subtle sub-point in a story he’s trying to tell, rather than being the story itself. He’s Tony the Chef, after all, not Tony the Junkie. That would have been a much less compelling tale, overall.

Despite the fact that I’m no Master of Reviews, I hope this at least piqued your interest.

*Is that too cloying? It’s too cloying, isn’t it? What the fuck does ‘cloying’ even mean? Whatever. I’m going to bed.

I can’t remember when I first encountered the faintest wisps of secondhand talk about these guys. My circle of friends once intermittently overlapped with some pretty gung-ho indie music aficionados – the kind who talk about bands that I’m pretty sure they made up half the time just to fuck with me – so it could have been through them, maybe?

But yeah, so there’s these guys. They’ve been touring with Arcade Fire lately, opening at several major gigs around the country, doing their thang. I must say, they have a moderately enjoyable sound, made interesting by the deep-dipping of the baritone lead guy. It’s different,* but I’m not necessarily in a rush to go buy up all their musics.

*Because, as I oh-so-briefly rack my brain bins, I can’t think of a comparable band – except maybe Editors? – with these sort of distinct vocals. Also note that I didn’t just know Mr. Berninger was a “baritone vocalist;” thank Allmusic for that one. To me, it just sounded “not like other stuff I’ve heard,” which is how I describe everything I hear for the first time.

So I was reading Kevin C. Johnson’s review  of The Arcade Fire concert here on Thursday and he mentioned the opening act The National. I was all like “Oh, yeah, I think that maybe I’ve heard of them? Maybe? I have a friend who likes them? Or something?” And then I was like “Oh, I should check out some of their music, because I generally agree with Kevin C.’s (I call him Kevin C., because we go way back) recs.”

And then I was all like “Oh, what a fantastic Theme Week idea! I find a song from an artist/group that I’ve only heard about and feature it each day! I could think of my friends’ favorite artists and finally get around to checking them out for myself! Jackpot, Julie!”

We interrupt this break…

Walter, Wally for short, but you can only call him that if he specifically gives you permission. Trust me on this one.

Well, folks, I’m back! The past week I spent lounging on the beach was awesome, let me tell ya! I got a tan, and learned to surf, and swam with dolphins, and adopted a pet manatee – his name is Walter, and he is adorable.

And then I woke up.

But no, for serious: it has apparently been a busy week, though to my recollection I didn’t really do anything except go to work and almost get pelted to death by hail the size of baby orangutans (more on that in a bit). But I must have been doing something, because why else would I have been keeping my loyal reader(s) waiting for a new post for oh-so-long?

I’d apologize if I meant it, but I don’t, so I won’t. I will, however, give you an incredibly tantalizing sneak-preview of what’s on tap this week at The Sloppy Copy:


1. A new SOTD Theme Week!
2. More on that “almost getting pelted to death by hail the size of baby orangutans” bit I mentioned earlier
3. More Conversations with Juanita and a new Best in Show pic
4. I guess I’ll pick something to review for tomorrow. Oh! I just finished a book – an actual book! There we go.
5. Maybe I’ll even post something on the formerly-promised Fiction Thursday, but don’t hold your breath. Blue is not your color.

In the meantime, here’s a random pic for your enjoyment: 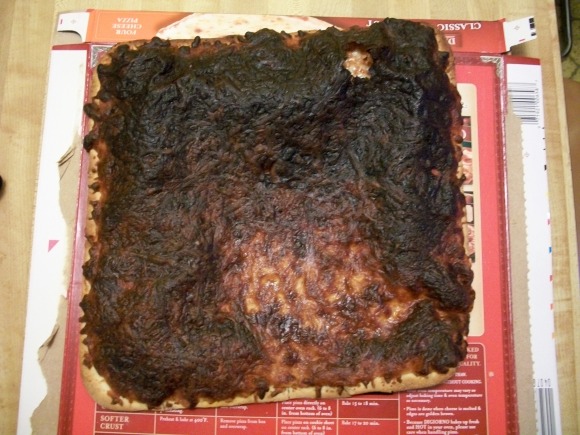 Any guesses as to what this is?

And rounding out the week!
Lately I’ve realized that when a particular “lost oldie” resurfaces, it does so with a vengeance. Meaning: I’ll hear it once – for the first time in eons – and then I can’t stop hearing it.
This is one such song, one that literally made me almost leap from my bed when I heard it on one of those Time Life Music Collection infomercials at 2:00 am. I immediately texted Brother, who immediately shat himself.
I certainly hope this inspired a similar loss of bowel control in someone else, even though the novelty has since worn off for me

Every time my mom hears this song she comments on the line “Hugging a tree when you get near it.”  It roughly translates to “damn hippies!”

Taking a respite from transcribing my pages and pages of Juanita quotes to bring you a text-message exchange between Brother and I.

Preface: There is rarely little, if any, context to any of the text conversations I exchange with my brother. There was no prelude to the initial text here; it just appeared in my inbox one morning.

Brother: Damn! I wish I was in your lecture!

P.S. Some explanation is here, if needed

I heard this one a few days ago, for the first time in yeeeeeears.

I’ve often commented that, when it finally comes time to go through my dozens of boxes in “The Unit” it’ll be like Christmas. See, I figured it’d be a fun little 45-second diversion as I unpacked – nothing too breathtaking, maybe like opening up a wrapped plastic candy cane full of M&Ms: Oooh I wonder what it could possibly be?

I mean, seeing things that I haven’t seen in a long while can be slightly nifty (like hearing songs I haven’t heard in years – BAM! Look at me making connections!), but how cool could it actually be? Opening a cardboard box and finding the set of silverware you’ve owned for five years just doesn’t sound like a particularly magical discovery. Right?

Oh, so wrong. So completely and totally wrong.

Today I ventured out to The Unit to pull out my old television set so that I could donate it to a local thrift store out of the goodness of my heart. While rummaging around piles of really really dusty boxes (seriously! Where does this dust come from? No, don’t answer that, because it will probably make me ill – have you ever seen a magnified picture of a dust mite? AAAAHHHHH!), I came across one that was labelled “food.”

I took the box back to the house, fully intending to open it outdoors, next to a trash can. Once home, I placed it in the driveway, Hefty bag at the ready. I slowly peeled away the tape and gingerly peered inside, only to discover that it was a box full of…

NO, FOR REAL, that is exactly how I described it to poor Juanita as I almost-literally dragged her out of the house to see: “A box full of awesome?” she asked. “Ssssh…don’t ask questions. Just see!” I answered.

It was maybe a 15- to 20-lb box* that included the following treasures:
One unopened can of Quaker Instant Oats!
Two unopened boxes of still-chewy raisins!!
Boxes of instant pistachio pudding and chocolate pudding!!!
One unopened box of MINI FRUIT ROLL UPS!!!!

All this, and MORE. Still-usable herbs and spices that had been carefully sealed away (I don’t remember putting this much forethought into my packing!), packages of instant rice, still-good Nutri-Grain bars… it was nothing short of amazing.

To say that I am now completely and totally AMPED to dig into the rest of the boxes is the Understatement Of The Universe. I mean, if I can wring at least one hour of uninterrupted elation out of opening a box of oatmeal, I’ll probably damn-near soil myself when I get to boxes labelled “purses” or “miscellaneous.”

*Or not. I cannot estimate any sort of useful unit of measure to save my life.